Learn from what happened on the beach in CA when officer attempted to cite young woman.  They WILL STAND DOWN WHEN WE THE PEOPLE STAND UP & SUPPORT ONE ANOTHER! They have NO Constitutional authority to violate our Civil Liberties!

My Note: Statutes, Orders, Policy, Rules, Regulations, & repugnant law are Color of Law & do NOT supersede Constitution secured Creator Endowed RIGHTS! Gov Whitmer has no constitutional authority to extend ‘State Emergency’ past May 1, because Legislature must approve State Emergency per Michigan Constitution and they denied her order and why they are now suing her and as well as many businesses and individuals. Then there is this👇 read:

Title 18 U.S.C. Section 242 Deprivation of Rights Under Color of Law

SOMETIMES YOU CAN’T TELL THE PUBLIC THE TRUTH

The truth will be completely exposed and is.  Read ‘Dr Mary’s Monkey’ book to learn about SV-40 polio vaccine going back to 60’s created cancer epidemic in boomers.  Listen, learn, & share this information with whomever will listen. This is current information for current events of corruption, and crimes against humanity.

Bills Introduced To Limit Governor’s Emergency Lockdown Powers – Two laws authorize this power; one has no limit on how long governor can keep it. [per Constitution she has no authorization to lockdown healthy people. Orders do NOT nullify our God endowed RIGHTS secured by our Constitution. She can only quarantine infected individuals. Read this LAW]

In A Michigan County, A Fever Could Land You In Jail If You Don’t Self-Quarantine – Grand Rapids assistant city attorney: ‘This order is unlawful, illegal and unenforceable’

Lockdown Threatens His Labor Of 12 Years, Their Livelihoods, Her Education – Grand Rapids coffee roaster not optimistic if economy still closed after May 1.

Started the Global Alliance for Vaccines and Immunization (GAVI) in 2000 (donated $750 million) a “Vaccine Alliance”, who claim to have vaccinated half the world’s children(with poisonous vaccines).

Gave 496,000 Indian children polio through his new “polio vaccine”, as confirmed by WHO. Gates is now wanted in India for crimes against humanity.

By 2018, 75% of polio cases worldwide were from “Gates Vaccines.” Gates introduced the world to a new form of polio that he funded.

In 2014, Gates gave 23,000 Indian girls HPV vaccines – Gardasil and Cervarix from Merck and Glaxo Smith Kline (formerly Burroughs-Wellcome) – 5% had severe side effects, most were permanently sterilized, seven died, and the vaccine was useless against HPV. Gate’s staff were prosecuted by the Indian government for forging signatures, coercion, and refusing medical treatment for side effects.

In 2014, the WHO chemically sterilized millions of Kenyan women with a “Gates tetanus vaccine” that was poisonous, and later the WHO publicly admitted it.

Created the Strategic Advisory Group of Experts (SAGE) to advise WHO on vaccine and immunization policies, research and development, and delivery systems, This secretive group is chaired by Sir Peter Vallance, ex Glaxo Smith Kline director, a top vaccine warlord.

Gates committed $10 billion to the WHO campaign to reduce the world’s populationthrough new vaccines. He bragged that his new Green Program for Africa will depopulate Africa by 10-15%.

Has controlled the Department of International Development (DFID) through donations since 2000. This British group demands that countries donated to the Gates Vaccine Wars and it controls media vaccine propaganda to hide the true intention of Vaccine Warlords and make Gates, SAGE, WHO. CDC, NIH and Big Pharma true heroes looking after the safety of people everywhere. DFID is hosting an international vaccine summit in June 2020. Anyone questioning the Bill Gates Vaccine War lockdown narrative will be silenced.

Started the Coalition for Epidemic Preparedness (CEPI) in 2017 to accelerate new vaccine creation and distribution. CEPI gave $8.4 million to Imperial College in 2017 to develop “Vaccine X”, a vaccine targeted for every person on the planet.

Donated 200 million to CDC to help develop a COVID-19 vaccine knowing that no such vaccine is possible.

Donated &100 million to Anthony Fauci’s efforts to create new vaccines at the National Institute for Health. The NIH donated $3.7 million of that money to the Wu Han Institute of Virology, the only level four bioweapon lab in China where the Chinese doctor (Dr. Qiu) who had breached the Canadian National Microbiology Laboratory had taken the Birtish/Canadian virus bioweapons, developed by Pirbright, Merial, and QinetiQ, to China.

Donated £184 million to Imperial College of London for fake Covid-19 propaganda death predictions, 2.2 million in America and over 1.5 million in England. Gates is looking to COVID-19 to force his third world vaccination programs on the Western world and mandatory vaccine ID implanted in every human being.

A child dies every 30 seconds from starvation, 3 million a year, but that’s not good enough for Bill Gates, END_OF_DOCUMENT_TOKEN_TO_BE_REPLACED

This is a MUST LISTEN!  James R gives commentary on some of the Corona Virus Task Force press conference yesterday, but hang on to your seat because when that is finished Director Mike gives important intel.  The video might stop with this message ‘something happened’ but all I had to do was start again and it continued from ‘error stop’. Colorful language as usual but for some people that is the best way for them to express importance of message 🙂

ALERT DO NOT DONATE MONEY TO THIS SITE!  SIGN PETITION TO SPEAK OUT BUT AFTER RESEARCHING THIS IS NOT AN OFFICIAL FORM PETITION FOR MICHIGAN ONLY REGISTERED VOTERS!  IT IS CAPITALIZING ON THE VERY STRONG DISLIKE PEOPLE HAVE FOR GOVERNOR WHITMER. I SIGNED TO EXPRESS MY DISLIKE BUT DO NOT DONATE MONEY, UNLESS OF COURSE YOU WANT TO CONTRIBUTE TO THEM PROFIT FROM A PETITION THAT CANNOT BE FILED IN MICHIGAN TO ACTUALLY REMOVE HER. WE NEED LEGISLATORS IN MICHIGAN TO IMPEACH HER, MAKE THE CALLS, DOESN’T COST ANYTHING! 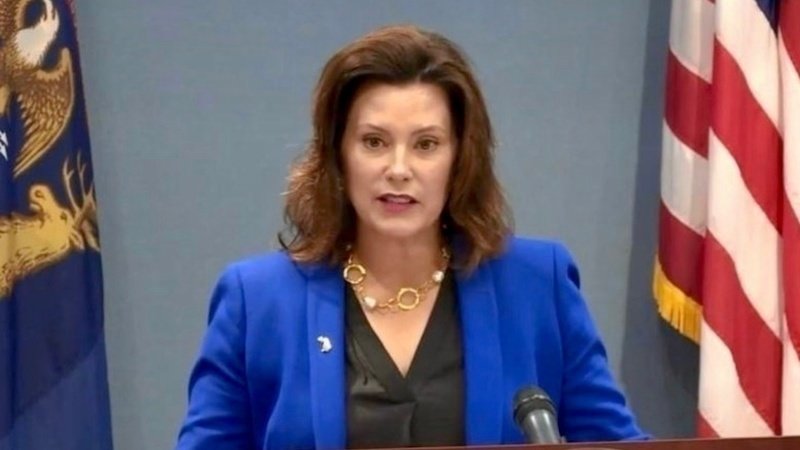 Recall/Impeach Governor Whitmer. Her failure’s during the Covid-19 Corona Virus is causing more Michiganders to get sick. Closing and banning various non essential business’s and activities while leaving others open. Further promoting the pandemic. She has lied since day one with her #Fixthedamnroads which she has failed to do anything in this regards. The response to #PFAS was negligence and completely removing funding for #PureMichigan clearly shows her lack of anything positive for the State of Michigan.

MY NOTE:  Governor Whitmer  has used COVID19  situation to grab POWER!  Shutting down small businesses statewide is extremely harmful to an already oppressive Michigan economy. She has stopped sell of non-essential items statewide, please point to article in Constitution authorizing this order.

Governor Whitmer is limiting travel including from home to home or camp,($1500 fine was just given to person going home from Hale after her edict this past weekend)

Gov Whitmer is even denying use of boats with a motor really?

She’s removing many other CONSTITUTION secured rights as well, such as ability to purchase garden seeds or plants to GROW FOOD, and Michigan has a short growing season as is.

Gov Whitmer could have honored her Oath of Office and contained epidemic by limiting quarantine to only those infected which is within Constitution.  No where is it in our Constitution she has authority to quarantine our entire state!  Nor does she have authority to STOP COMMERCE or PRIVATE BUSINESS.  We are ADULTS and we know how to take precautions to protect self, family, and co-workers.  She also denied Hydroxycholoroquine + Z Pac, (She since has rescinded that edict when DOCTORS backed her down), which is a proven 5-Day CURE, yes it is a cure, no vaccine needed!
This is NOT about President Trump so do not let trolls lead you to believe it is, its about our FREEDOM, LIBERTY, and PROSPERITY!

Governor Whitmer is abusing her power using NAZI POLICE STATE tactics.  We can not allow FOUR (4) corrupt counties & a corrupt Governor to set precedent for all Michiganders! Let it be known to all:

Executive Orders, even under a State Emergency do NOT supersede or nullify our MICHIGAN CONSTITUTION or NATIONAL CONSTITUTION which is SUPREME LAW securing our RIGHTS against tyranny!

Alert: There are two recall petitions so be sure the one you sign is addressing covid19 and has ‘impeach’ in url, you’ll know because last time I checked it was over 160K and rapidly climbing, there is another for recall over fuel tax that is NOT the main petition.  Below should be the correct link but there has been some shenanigans taking place with this link on comments I leave on twitter reverting link to fuel tax petition, and it has been changed twice on link below as well.  There’s a search engine on change.org to search if this link opens to the fuel tax recall petition again, you of course should sign that too, but it isn’t the main petition gaining HUGE traction!  Thank you!

This is not an official lawful Michigan petition to actually begin a recall on Governor Whitmer, but it does show the strong dislike for her, and if enough people in Michigan come together perhaps we could get a lawful recall petition started within our state.  Contact Representatives!

The only was we the people can free ourselves is to first ‘free our mind’ of the psyop that has been thrust upon us over the decades by CIA MSM & false science.  Listen to Dr Shiva’s message, it speaks truth, and also hear what he is saying about ‘health’. Health doesn’t come from prescriptions or vaccines, never did, never will. Self-educate, do your own research, the world is at your finger tips! Seek truth and settle for nothing less than truth.  We must return to common sense, logic, truth, wisdom, principles, values, and morality, my words not Dr. Shiva’s.