NOTE: APPARENTLY THE BELOW VIDEO IS NOT AVAILABLE NOW, AND I CAN’T FIND IT ANYWHERE YET ??  SO I WILL SHARE THIS, IT ISN’T THE SAME INFORMATON BUT EQUALLY IMPORTANT:

THE FALL OF THE CABAL PART ONE

THE FALL OF THE CABAL PART TWO

THE FALL OF THE CABAL PART 3

If you’re not familiar with the ‘STRAWMAN CORPORATE INSTRUMENT’ you’ll need to listen to this a few times to grasp what it is disclosing.

Joe Biden’s Inauguration has been cancelled, President Trump would remain in office and the Chinese Communist Party propaganda media outlets of ABC, NBC, CBS, Fox News, CNN and MSNBC would soon be off the airwaves according to President Trump.

“I have invoked the Insurrection Act of 1807 (Section 10 U.S. Code 13 251-255) to address the treasonous rebellion conducted by Democrat and Republican lawmakers, CCP Agents (Chinese Communist Party), FBI, Department of Justice, CIA and others to dismantle the United States of America and it’s Constitution,” President Trump declared on Thursday 14 Jan. “These entities pose a direct threat to national security. I will remain President indefinitely until all domestic enemies are arrested.”

President Trump invoked the Insurrection Act after another assassination attempt on him last Sat. morning 9 Jan. According to his Intel, Chinese Communist Party Agents, the FBI, Department of Justice, CIA and others of the Deep State have – with the help of the Main Stream Media – long been planning to dismantle the US and it’s Constitution.

Of course, none of these treasonous acts have been reported by the corrupt Main Stream Media. Trump had evidence that the MSM was “embedded with CIA and Chinese Communist Party agents whose sole purpose was to direct public opinion toward a Deep State agenda.”

During President Trump’s four years in office he and what has been referred to as the Alliance have been fighting this Cabal – a Satan worshipping force composed of thirteen Satanist Bloodline families out of Italy, the Vatican, UK Monarchy, British M16, Chinese Communist Party, CIA, FBI, Department of Justice, Antifa, Black Lives Matter and certain Republican and Democratic Lawmakers. Another attempt on his life was the last straw.

Since that Sat. 9 Jan. the US has been under an abbreviated Martial Law with President Trump as Commander in Chief and General Flynn in charge of the Military. As such Trump has signed multiple Executive Orders that among other powers, allowed for Military arrests and Tribunals.

Soon to be acted upon were well over 222,286 sealed indictments against political and global elites filed in federal courts across the nation. 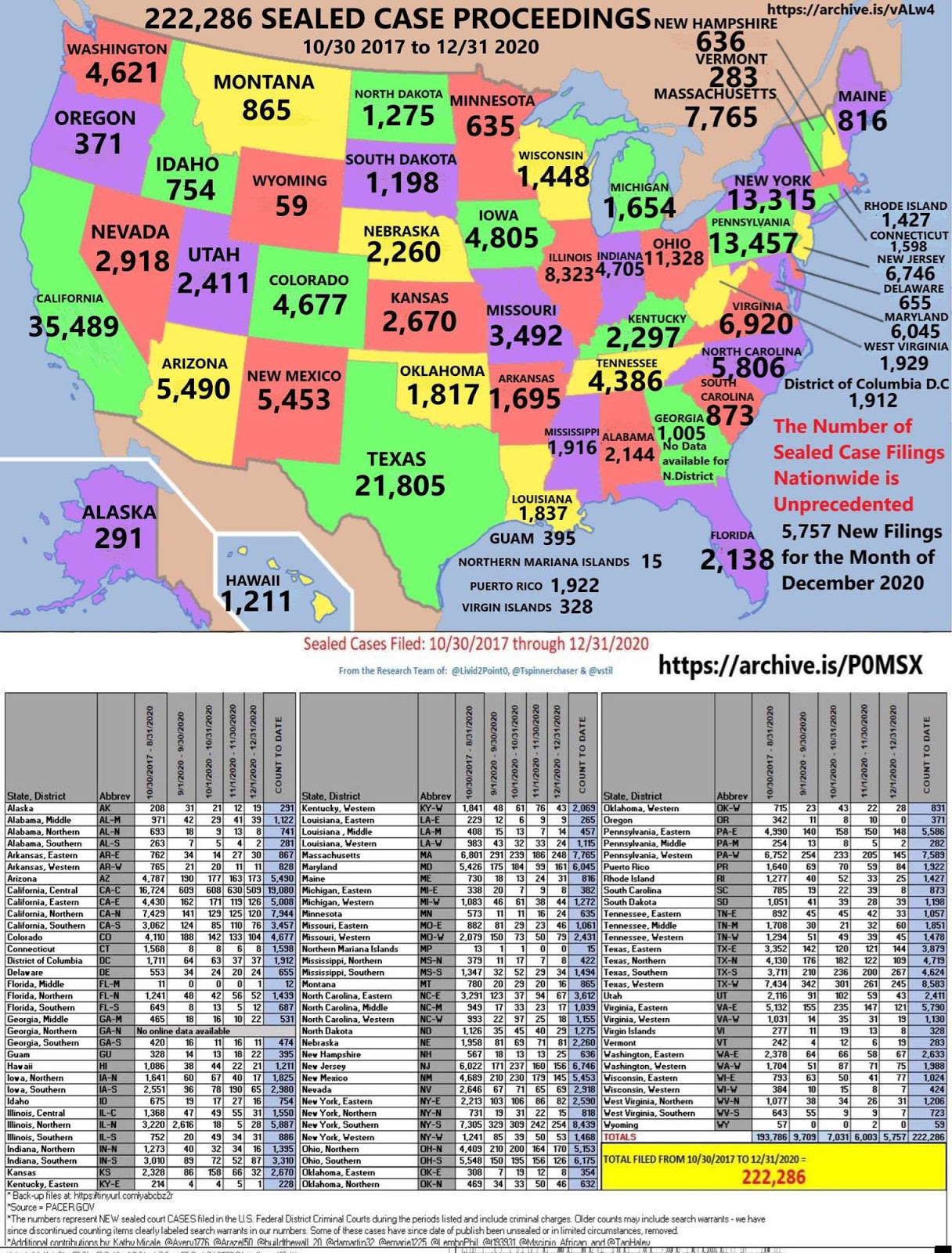 By law with the Insurrection Act in effect, Trump would remain President indefinitely until all domestic enemies were arrested. He would soon take down the Main Stream Media.

“I’m drafting an Executive Order to take the following propaganda media outlets off the airwaves: ABC, NBC, CBS, Fox News, CNN and MSNBC. I am also working with the FCC to pull their licenses. We have evidence that all of these media organizations employ agents of the Chinese Communist Party as well as embedded CIA Agents whose sole purpose is to brainwash, hypnotize and direct public opinion toward certain agendas that support the Left and Deep State. These organizations are a threat to national security and virtually nothing they report is actual news.”

That same Sat. 9 Jan. POTUS and the Department of Defense postponed the 20 Jan. Presidential Inauguration. Intel sources claimed that if Joe Biden was not inaugurated there were corrupt-FBI plans to help stage Antifa and BLM violence in DC and at the 50 state capitols from Sat 16 Jan. through Wed. 20 Jan. Biden couldn’t be inaugurated anyway because of the Insurrection Act that demanded Trump remain in office “until all domestic enemies were arrested.”

[My note: Biden is also under indictment in Ukraine]

A corrupt Mass Media has refused to report anything but their Left Wing agenda believed paid for by the CCP. Thus, the President has announced he would soon activate the Emergency Broadcast System (EBS). This was expected during what has been referred to as Ten Days of Darkness, or media outage.

With the EBS everyone would get alerts on their phones, TV, radio and Internet that would override other broadcasts for several hours at a time. The broadcasts would explain the silent war happening across the globe between the Cabal and Alliance.

This week Trump Intel providers Robert David Steele and Juan OSavin explained, “This may not be settled until April 1. Anyone including Fox, who refuses to broadcast the President of the US faces loss of their FCC licenses as well as criminal punitive actions, perhaps a military takeover.”

On Wed. 13 Jan. in an urgent message to the American people President Trump called for peace. Intel sources were reporting that riots were planned in DC and across the nation. He condemned the rioters at the state capitol, as well as a recent assault by Social Media on our Freedom of Speech and then activated military forces to quell unrest.

The recent violation of Social Media platforms to censor Freedom of Speech was of concern. Donald Trump Jr. to the rescue. Trump Jr. announced that a new social media platform was coming soon called the Freedom Social Network.

It was all a part of the Alliance’s Plan to free the globe of the Communist Parties /Cabal’s suppression of The People. “The Plan To Save The World”

President Trump did win with a landslide but the communist democrats are doing all they can to steal it from We the People and our re-elected POTUS Donald J. Trump.  Extreme measures may need to be taken to stop the totally corrupt unelected permanent bureaucracy that has been built by domestic enemies since they murdered JFK. Stand strong, stand firm, do not backdown, do not surrender, and do not comply, we will win!

EXPLOSIVE!!  You will not hear this information on mainstream media.  Even though there is numerous affidavits attesting to fraud, and physical evidence on servers obtained from Germany, as well as other evident, the media and democrats are still denying their is voter fraud, why?  Because they’re the perpetrators of this fraud.  Michigan, mainly Wayne County (Detroit) is strongly mentioned in this press conference.  Two electors who rescinded their certification only gave it due to threats and persecution.  I heard the video but have not been able to obtain a copy to post, but if and when I do, I will post it.

Important information the American people are not being told by mainstream media.  There is a huge push by mainstream, including social platforms, to push the fraud saying Biden won the election, what they do not disclose to people is that win was all by fraud. Biden did NOT win, it was STOLEN for him.  This panel of high level intelligent inside professionals lay-out what has happened and the plan moving forward.  Understand this, ‘President Trump won by a landslide’ and this is why their fraud is exposed because they can only steal elections that are close in numbers.  Dems stopped counting because President Trump was ahead by millions, so they had to ‘harvest’ more ballots, and why hundreds of thousands of ballot only had Biden selected, no other candidates on the ballot were marked.  Listen and become informed on truth, not fraud and lies being spewed on by mainstream and all ‘programming.’  This panel also discusses Great Britain’s control and involvement.

That Miraculously ONLY have a vote for Joe Biden

That means there were no other selections on the ballot, only Joe Biden was selected, don’t you think that rather odd?   Sidney Powell is General Flynn’s personal attorney, who produced evidence proving his innocence so DOJ dropped charges against him, but corrupt Judge Sullivan will not accept.  She is extremely credible and honest.

Check it out real time captured live on CNN.  Updated occurred in 3 sec faster than ‘ribbon’ at bottom updated.  Blue increased by 560 votes as Red decreased by exactly 560 votes!  Watch video and see for yourself or look at the frame I captured from video (6 min) below:

This explains what is REALLY going on with the ‘laptop’, its not about Hunter.  Please listen and share because our REPUBLIC is at stake and I can attest to this because I’ve known much of this for a very long time.  Anyone older, who has paid attention to anything at all, knows something is very wrong, but not sure exactly what.  This is just one area conpromised, but the most critical due to our election Tuesday, and Joe Biden being the opposing candidate.