“As bad as the ruling and political class’s totalitarian response to this so-called emergency has been, it pales in comparison to the pathetic reaction by the people of this country….Complacency and conformity are useless and will lead only to servitude. The time for action is now or never.”
Since when is depriving the body and mind of oxygen, and breathing in expelled carbon dioxide (CO2) good for the health of humans?
Since when is wearing a partial face covering that is multiple times more porous than can protect against any virus penetration helpful?

Since when is hiding all expression from others not psychologically damaging?
Since when is it legitimate and not hypocritical for the state to outlaw Muslim women from wearing head and face coverings that are part of their culture, and in the same breath force all Americans to cover their faces with a mask?
Since when does any politician have any right to dictate to an entire population that they have to wear masks or any other type of clothing? Since when in this day and age did absolute slavery of all become a mainstay of American society? Read full article by clicking link above.

Free your enslaved mind, take off the mask!

When one with honeyed words but evil mind persuades the mob, great woes befall the state.  —Euripides

Tricks and treachery are the practice of fools, that don’t have brains enough to be honest.  —Benjamin Franklin

Everything Dr. Fraud has said and done since January has been designed to increase deaths and hysteria, to collapse America, and to defeat Trump.

The NIH doc has been everywhere…on TV, interviews etc. urging Americans to lockdown, abandon jobs and their sick and dying family members, their businesses they built with blood, sweat and tears.  He drove our economy into the dirt, kept children out of school (a good thing today), and eliminated graduations, proms, weddings, vacations, funerals, and church gatherings.  If we didn’t do this, we were no better than serial murderers.  Americans were relentlessly demonized for daring to speak out or even question the Holy Writ of Fauci…the unconstitutional lockdowns, the MSM that empowered democratic governors in their totalitarian dictatorships.

The flagrant violation of our Constitutional rights, all these Kafka-esque rules that protected big businesses like Walmart and further empowered massive corporations like Amazon, while small business withered and died were purposeful. Democrat New York Mayor Bill de Blasio (aka Warren Wilhelm) was finally allowed to openly practice his antisemitism. Fauci allowed this…and he did it to destroy the one and only President we’ve had in decades who has fought for the American people.

Rise up!  Rip off the masks! Breathe fresh air!  Dump the government kool-aid…the cry is FREEDOM!!!

Submitted to me via email by Grey Beard 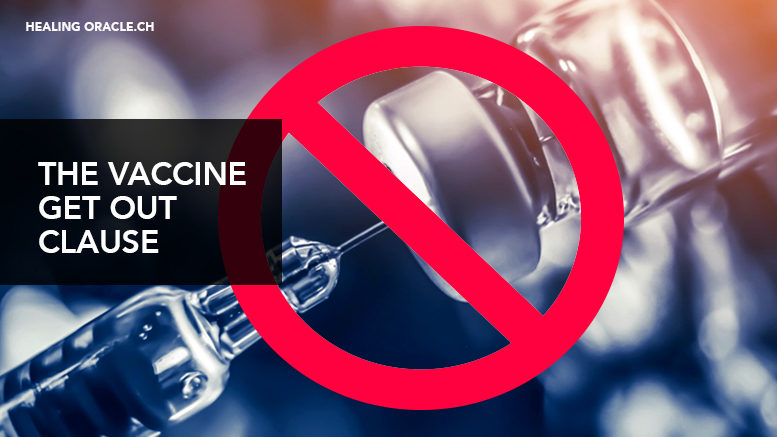 With vaccines looking like the inevitable outcome of the coronavirus hype. It looks likely that what will follow is mandatory vaccines, digital ID chip implants and many other assaults on our freedom to choose more or less anything.

From a legal perspective it is a necessity to exercise your rights to decide. All you require is clarity and appreciation of the various risks involved. An understanding of the ingredients and their effects.

In fact, mandatory vaccinations are a direct violation of The Nuremberg code.

It feels now more than ever that the mass experimentation on humanity is under way once more with enforced vaccines looking an inevitable thing for anyone that’s wants to do anything. But know your rights and be better prepared.

The Nuremberg Code is one of the most influential documents in the history of clinical research.

Code 1. The voluntary consent of the human subject is absolutely essential. END_OF_DOCUMENT_TOKEN_TO_BE_REPLACED

How The ‘Elites’ Have Pulled Off the Plandemic

“Showing strong and effective leadership when we need it most, President Trump addressed the nation Wednesday night and unveiled a two-pronged program of health and economic actions to deal with the coronavirus pandemic,” Andy Puzder writes for Fox News.

“The president’s action plan should win bipartisan support to respond to the most serious health and humanitarian crisis our nation has faced in my nearly seven decades.”

Vice President Mike Pence said yesterday that the Trump Administration is “working every single day to clear out any red tape to make [Coronavirus] tests more and more available. Right now, every state lab in America can conduct testing.” President Trump has also brought in leaders from America’s top commercial labs, including Quest and LabCorp, to work with the Administration, Joshua Nelson reports for Fox News.

“Some 150,000 illegal immigrants from 72 nations with cases of the coronavirus have been apprehended or deemed inadmissible from entering the United States since November,” according to officials. These apprehensions underscore the need for border security and proper vetting. Read more from Paul Bedard in the Washington Examiner.

“Big and bold, optimistic and compassionate. President Trump’s Oval Office address was exactly what America needed to hear. This is what it looks like when a president rises up to meet a crisis head-on,” Michael Goodwin writes in the New York Post.

”We the people of the United States, in order to form a more perfect union, establish justice, insure domestic tranquility, provide for the common defense, promote the general welfare, and secure the blessings of liberty to ourselves and our posterity, do ordain and establish this Constitution for the United States of America.”

“What is one of the biggest problems: There are more people in gov’t than what there are to work in industry.”  ~Grey Beard

Note: Instead of bringing in low paid immigrants to fill this gap shut down wasteful useless bureaucracies and send those people to work in industry, as well as, all the able-bodied welfare recipients too. It would reduce the behemoth, do nothing but create chaos and war, government.

We have four major industrial complexes:

1. Bureaucracy: Gestapo ABC agencies and other extensions for an extension of another extension to employ all family and friends to the third generation.  We, the tax payer are forced to subsidize all these unconstitutional government employees.

2. Healthcare: aka Disease maintenance because this industry is based around pushing pharmaceutical drugs and barbaric cancer treatments of cut, burn, poison rather than actually using nature’s offerings to nourish the body back to homeostasis.

3. Education:  This is the most heinous because it involves our children. Not all but most public/state schools are not grooming children to be ‘play toys’ for reprobate perversions.  They’re no longer educating our children to ‘think’ but are indoctrinating to never question anything but to follow directions only.  Their minds are being twisted with the unnatural that does against nature and is causing confusion.  Common core is one of the tools used to dumb our youth down.  Computers for entrainment of their minds to robotic thought.  Some schools have 5000+ children attending! Parents have no idea what is gong on in these state schools yet they send their children to them daily for ‘programming’.  American children from, pre-school  to college, spend more time in ‘programming facilities’ than they spend with their parents who should be ‘training them up’.

4. Military: ‘Soldiers for hire’ we outsource our military to other countries.  Our soldiers, along with everything else,  are nothing more than ‘commodity’ for war mongers and bankers to use when they need to reduce population or remove a populist if a country’s people get too ‘rebellious’ thinking they have liberty to do what they want within their own borders.

This is, but a brief summary of each, based on my observation and/or experiences.  Corporate America would not agree with this analysis nor would most who draw a wage from one of these complexes.

I’ve been fully ‘awake’ for at least 50 years of my 66 years of life thus far. My social and career associations have been with bikers, tradesmen, veterans, Christians, educators, law enforcement, court workers, nurses, factory workers, corporate, gov’t, farmers, and many others.

I’ve worked in restaurants, a factory, hair salon, mental health, corrections, and most recent naturopathy.  I’ve been a worker bee, a manager, case worker, and an entrepreneur.   Financially I’ve been poor, getting by, comfortable, to upper middle-class.  Why do I tell you this, because I’ve been a witness to much in my quest for truth.

In closing, If you seek truth you will find it, but I pray by the grace of Almighty God, you’ll find his son, Jesus, if you haven’t already, because truth and reality might be more than can be handled without also faith, hope and strength given to us from the ‘Helper’ Jesus sends to us when we repent and put our faith in him and him alone.

Share this on Your Facebook, IG, Twitter, email…etc.  We need hundreds, if not thousands, to show up to this meeting to show all who will be watching that MICHIGAN completely supports and will defend our Constitution Bill of Rights!

Monroe County Commissioners: https://www.co.monroe.mi.us/officials… Address: The meetings of the Board of Commissioners are held in the Board Chambers on the First Floor of the County Office Building Addition, 125 East Second Street, Monroe.

A Resolution is not law.  The thing to do is put it on the November ballot and make it law!!!  There is time.

Here is the solution!

In Congress, July 4, 1776. The  Declaration Of Independence

The unanimous Declaration of the thirteen united States of America, When in the Course of human events, it becomes necessary for one people to dissolve the political bands which have connected them with another, and to assume among the powers of the earth, the separate and equal station to which the Laws of Nature and of Nature’s God entitle them, a decent respect to the opinions of mankind requires that they should declare the causes which impel them to the separation.

We hold these truths to be self-evident, that all men are created equal, that they are endowed by their Creator with certain unalienable Rights, that among these are Life, Liberty and the pursuit of Happiness.–That to secure these rights, Governments are instituted among Men, deriving their just powers from the consent of the governed, —

That whenever any Form of Government becomes destructive of these ends, it is the Right of the People to alter or to abolish it, and to institute new Government, laying its foundation on such principles and organizing its powers in such form, as to them shall seem most likely to effect their Safety and Happiness.

Prudence, indeed, will dictate that Governments long established should not be changed for light and transient causes; and accordingly all experience hath shewn, that mankind are more disposed to suffer, while evils are sufferable, than to right themselves by abolishing the forms to which they are accustomed.

But when a long train of abuses and usurpations, pursuing invariably the same Object evinces a design to reduce them under absolute Despotism, it is their right, it is their duty, to throw off such Government, and to provide new Guards for their future security.–Such has been the patient sufferance of these Colonies; and such is now the necessity which constrains them to alter their former Systems of Government. The history of the present King of Great Britain is a history of repeated injuries and usurpations, all having in direct object the establishment of an absolute Tyranny over these States. To prove this, let Facts be submitted to a candid world. END_OF_DOCUMENT_TOKEN_TO_BE_REPLACED

Excerpt: “Hemp is a commodity produced for fabric, paper, construction materials, food products, cosmetics, and cannabinoids (such as cannabidiol or CBD), among other products.